Home › Pro Wrestling › Drew McIntyre is a Made Man

Drew McIntyre is a Made Man 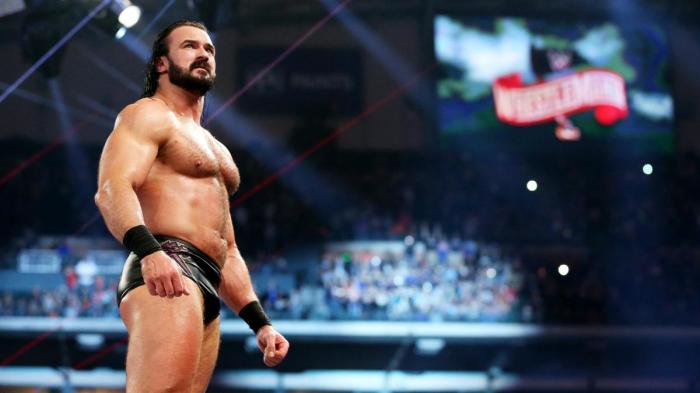 Drew McIntyre won the 2020 Royal Rumble match on Sunday, which emanated from Minute Maid Park in Houston, TX. The big story going in was WWE Champion Brock Lesnar voluntarily entered the rumble match as the number one entrant.

Lesnar’s dominance was on full display as he threw out the first thirteen entrants in succession to tie the record for the most eliminations. After Ricochet got flattened, the 6’5” 265 lbs. McIntyre entered at number 16 and eliminated Lesnar with a Claymore Kick (and a low blow assist from Ricochet).

McIntyre has been pegged to receive a megastar push since he returned to the WWE main roster in April 2018, where he was one of the top heels on Raw until his quiet babyface turn a few weeks ago. McIntyre received a couple stop and start pushes during his heel tenure.

Such activity prompted reports that the company was hesitant to go all the way with the Scottish native. There is a litany of wrestlers who the fans lost faith in due too many stop and start pushes. Many believed McIntyre was unfortunately headed in that direction.

Many also believed going into the show that one person would eliminate Lesnar, and someone else would win the rumble. WWE pulled the trigger with McIntyre by having him solve both of the rumble’s prominent story threads.

McIntyre had six eliminations that were bookended perfectly. He eliminated Lesnar to get the night started and kept his eye on the champ to ensure he didn’t blindside him in a fit of rage. Then, to end the night, McIntyre dumped out the guy who had his number all last year, Roman Reigns, to win it all.

In the coming months, we will see more of Drew McIntyre anchoring Raw’s opening promo segment. This is a prerequisite of being cast in WWE’s lead role. Last night, McIntyre handled himself exceptionally well during his first at-bat. He was charismatic, engaged the crowd, spoke well, had a natural presence, and came across as someone easy to like.

Following the promo. Karl Anderson and Luke Gallows were fed to McIntyre in a handicap match. Some were not pleased with The O.C. being the sacrificial lambs. However, Seth Rollins’ new stable supplanted them. McIntyre needed to steamroll an act with credibility, making it the right call.

Brock Lesnar vs. Drew McIntyre for the WWE Championship is officially the main event of WrestleMania 36 on April 5 in Tampa Bay, FL. Lesnar typically commands an opponent with a big name to capitalize on the match’s money-making potential. This is the genesis of McIntyre becoming a superstar.

This is a layup from a creative perspective. Drew McIntyre is everything a promoter wants in a professional wrestler. He’s big, handsome, looks tough, has commercial appeal, good on the mic, and he’s a great wrestler. I’m cautiously optimistic WWE will serve him well heading into Mania. However, right now, Drew McIntyre is a made man.