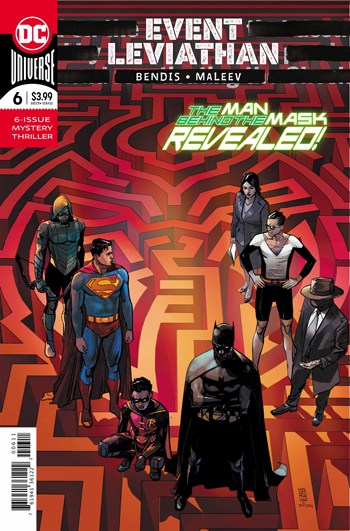 The biggest mystery plaguing the DC Universe reaches its conclusion. Who is Leviathan? We finally get our answer.

“I’m sorry, I don’t recognize you,” unfortunately, encapsulates the magnitude of the reveal when Superman used his x-way vision to peek under the hood.

Unmasking the villain needs to be a shocking experience.

Instead, Bendis used the moment to bring an obscure character to prominence.

That could have worked.

However, we never saw Leviathan actually do anything. Explosions, weird energy fields, and the collapse of the intelligence community wielded massive results.

Yet, Leviathan is never seen pulling the trigger himself or getting his hands dirty. He talked a big game and had people do his bidding. If Leviathan was going to roll up his sleeves finally, this was the time to do it. Instead, he retreats once he realized Superman would never join his cause.

I’m sorry, but how many times has Superman been fed the “Tear down the world to make it better” speech?

A lot would be the answer.

Its as if the characters in the book failed to realize something the reader has known about Earth’s greatest hero. I thought something different would have presented itself. Perhaps an argument that was fresh and compelling. Something to make Superman waver, even for a few fleeting seconds, would have given readers something to chew on.

Leviathan was portrayed as someone who is always five steps; however, he put all of his eggs in one red and blue basket. That doesn’t sound very smart al all.

The leaks that appeared online last month regarding Leviathan’s identity were correct.

I hoped they were wrong; however, it seemed too apparent after really thinking about it. The ending of the book is the beginning, as there is more to come from Leviathan. That would have been cool if I actually cared about the person in question. Leviathan peaced out once Superman turned him down.

Why would I be intrigued about any threat he could pose to Supes or the Justice League going forward?

Bendis is in the Leviathan business for the long haul. I hope he can bring something that will have an impact because, unfortunately, this wasn’t it.