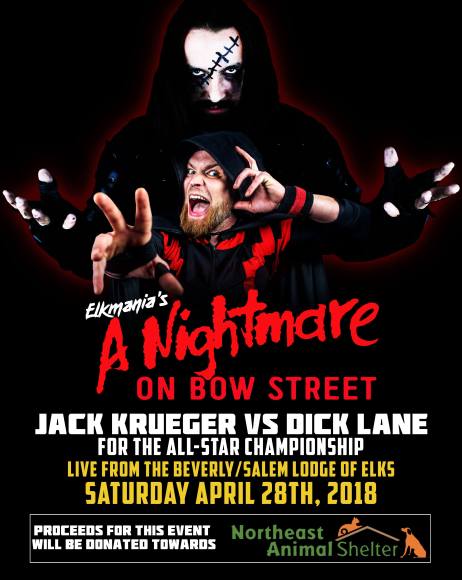 A Nightmare on Bow Street takes place on Saturday, April 28 at the Beverly/Salem Elks Lodge, 39 Bow Street, Beverly, MA. Doors open at 6:30 pm. Bell time is 7:00 pm. This event is a fundraiser for the wonderful animals at the Northeast Animal Shelter.

At ElkMania 5, Krueger came within an eyelash of losing the All-Star Championship. Just as victory was in Lane’s grasp, a terrifying horror was unleashed leaving Lane beaten unmercifully. At A Nightmare on Bow Street, Dick Lane will get his rematch for Jack Krueger’s All-Star Title, as Lane believes he has the “anti-life equation” to thwart Krueger’s reign of terror.

A Nightmare on Bow Street will also feature a clash between Bay State Champion Derek Simonetti (fighting out of Salem, MA) and the dangerous Alexander Lee. Simonetti is a fan favorite and two-time champion, but the precision and sly tactics of Lee could prove this to be his toughest title defense.

In what could be the match of the year, the Middlesex Express will defend the New England Tag Team Championship against the Maine State Posse. Both teams have been making major waves all across the circuit with their innovative tandem offense. In the end, one team will rise, and the other will fall.

Adding to the evening’s action, we’ll see Delilah Hayden take on The Widow Belmont and “Tough Talk” Tony Spencer lock horns with Theodore J. Liftington to determine who really is the strongest man in the room.

A Nightmare on Bow Street promises to be a night you don’t want to miss! Tickets are $10.00 in advance and are on sale at Silver Moon Comics & Collectibles inside of the Witch City Mall in Salem, MA and Paper Asylum in Beverly, MA. Tickets will be available at the door for $12.00