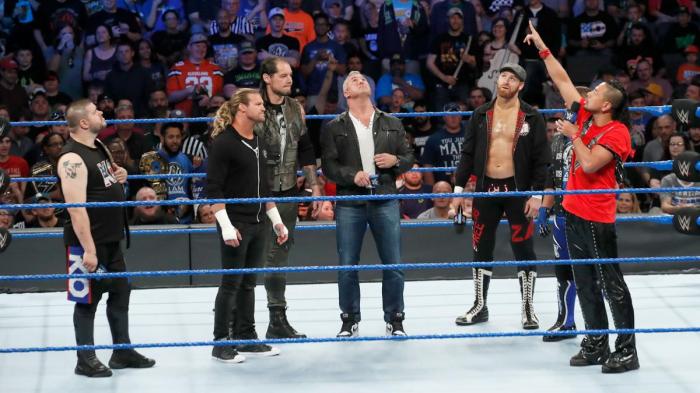 WWE announced the six participants in this year’s Money in the Bank ladder match, last night, on SmackDown. Money in the Bank will air live on the WWE Network and will emanate from the Scottrade Center in St. Louis, Missouri on June 18th.

AJ Styles, Shinsuke Nakamura, Sami Zayn, Dolph Ziggler, Baron Corbin and U.S. Champion Kevin Owens will compete for the briefcase where the winner will have a guaranteed WWE Championship match, anytime, for the next twelve months.

Shane McMahon made the announcement at the beginning of the show where he originally only announced five wrestlers for the match. Kevin Owens interrupted and convinced Shane into adding him when he pointed out that Styles, who he beat at Backlash, is in the match.

It was also announced that Randy Orton will get his WWE Championship rematch in his hometown against Jinder Mahal. Mahal defeated Orton at Backlash to win the title. For Orton, a win at Money in the Bank will mark his 14th title reign.

Baron Corbin is the weak link, however, he performs pretty well when he’s booked with a clear sense of direction. Corbin tends to falter a bit when the creative reigns are loosened and he’s left to his own devices. This will also be his first ladder match and a high-profile one at that.

Shinsuke Nakamura is another question mark. That sounds very weird considering its Nakamura we’re talking about. While he’s super creative in the ring, this will also be the first ladder match for a wrestler who predominantly worked in Japan where these type of matches don’t happen.

AJ Styles, Kevin Owens, Sami Zayn and Dolph Ziggler are always money when it comes to ladder matches. If Nakamura isn’t flustered by the environment, which I don’t think will be the case, and Corbin is booked to look strong, we’re in for one hell of a treat in four weeks time.