Ricochet & Ospreay Are Changing the Game 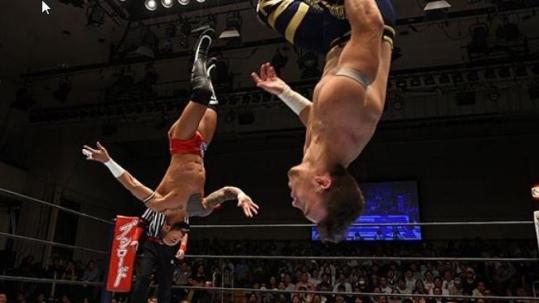 Last year’s Best of the Super Juniors (BOSJ) match between Ricochet and Will Ospreay drew highly divisive opinions from the pro wrestling community. Chris Jericho praised the match for its aerial evolution while Vader panned it due its choreographed nature. Fans were equally torn on the matter.

For me, Ricochet vs. Will Ospreay goes against everything I was trained to believe as a wrestler under the doctrine that less is more. Still, I found the match highly entertaining despite some major flaws. The rematch occurred last Thursday as it headlined the second night of BOSJ at Korakuen Hall, featuring Block A matches.

The sequel is superior to the original in almost every way. One of the problems in their first outing is how blatantly loud Ospreay and Ricochet were calling their spots in the ring. None of that happened this time around, which made the match more enjoyable because I didn’t know what was coming next.

Innovative moves and death-defying sequences were paramount in both matches. What separates the second affair from the first is how fewer moves were wasted and that there was more emphasis on doing things at the right time. Sure, a few liberties were taken but that happens in almost every match.

The intensity exhibited by both men was higher, which is amazing considering the first match had plenty to go around. The one thing that did bother me though was the lack of pin attempts. It felt as if they were so caught up in the spectacle of it all, that displaying the will to win fell by the wayside.

Ospreay won the match after hitting a corkscrew kick followed by an OsCutter and applauded the fans while referring to what he does in the ring as an art form. Whether people love or loathe what these two do in the ring, there is no doubt that they’ve changed the conversation when it comes to what is good and bad about professional wrestling.