Best of the Super Juniors Final: Ospreay vs. Taguchi – Review

Fourteen matches over two weeks in multiple cities have brought us to the final round of New Japan Pro Wrestling’s Best of the Super Juniors. A Block winner Ryusuke Taguchi faces B Block winner Will Ospreay. There is a lot of hype on Ospreay as he is one of the most exciting wrestlers to watch. While Taguchi’s antics makes him easy to overlook, he knows when to buckle down and get to work.

Will Ospreay vs. Ryusuke Taguchi: There was a feeling out process to begin things. Taguchi does his trademark upside-down taunt. Ospreay returned the favor with Taguchi’s own taunt.

Ospreay catches him with a big boot and follows up with some stiff chops. Ospreay applies and standing neck crank, snaps mares him over and hits a drop kick to the back of the neck. Taguchi comes back with dropkick to Ospreay’s left knee, which has been injured throughout the tournament.

Ospreay crawls to the corner and Tagichi stomps away at the knee. Ospreay gets sent into the ropes and comes back with handspring corkscrew kick and falls to canvas in pain. Damn, Ospreay knows how to sell.

Ospreay hits a one-legged springboard forearm smash and follows up with a standing corkscrew plancha for a two count. This match is taking place in Taguchi’s hometown but Ospreay is the crowd favorite. Ospreay continues his aerial assault with every move bringing more pain to his knee.

Ospreay goes for the Rainmaker, Taguchi reverses it, rolls up Ospreay and Taguchi snatches the leg off the kick out and applies an ankle lock. After fighting to get to the ropes with no avail, Ospreay gracefully puts his right leg on top of his left hamstring and uses the extra weight to break the hold.

After a series of reversals that could have gone on all day, Taguchi delivers a blue thunder bomb for a nearfall. Both men are down and the crowd is fired up. Taguchi came off the ropes with two hip attacks, delivered an enzguri, and connected with a springboard hip attack that sent Ospreay out of the ring. Ospreay attempted his springboard cutter but Taguchi grabbed his leg in midair and applied an ankle lock.

Taguchi lifted up Ospreay for the Dodon but Ospreay jumped to his shoulders to deliver a hurricanrana. Ospreay clotheslined Taguchi out of the ring and hit the Sasuke Special. After a superkick, Ospreay hit an inverted 450 splash that rocked that Sunplaza Hall. Everyone thought it was over but Taguchi kicked out. Ospreay followed up with the springboard cutter for the 1-2-3.

After the trophy presentation, Ospreay called out KUSHIDA, who was doing commentary. He stated that Okada brought him into Chaos for one reason and that is to take the IWGP junior heavyweight championship and challenged KUSHIDA for the title.

2016 Best of the Super Juniors Winner: Will Ospreay. 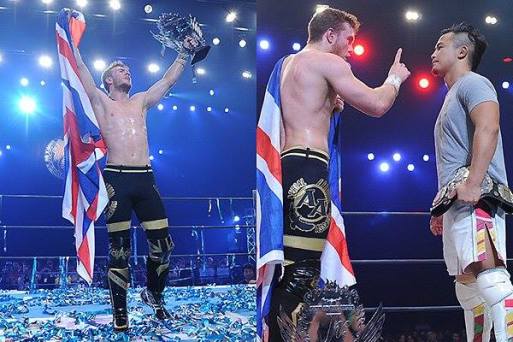 Final Overall Thoughts: Will Ospreay has almost come out off nowhere to become the new sensation of professional wrestling. At 23 years of age, he displays a maturity in the ring that is beyond his years. He is also youngest winner in tournament history. The sky’s the limit for the London native.

Ospreay vs. Ricochet on May 27th was the most talked about match of the tournament. Some people loved it and some people hated it. While the high-flying nature of the match goes against everything I was taught during my wrestling training, like the genre itself, my perspective on what makes a good match has evolved.

NJPW’s streaming service, New Japan World, was an amazing platform over the course of the tournament. They presented the option of either watching each event or just individual tournament bouts. Some of the smaller shows were filmed only with a steady wide shot and it was still fun to watch because the matches were that good.

The semi finals and finals were broadcast with Japanese and English commentary. The English option was a breath of fresh air because it eliminates the language barrier, which allows the viewer to learn about the storylines instead of only watching for the amazing matches.

All of the wrestlers on this tour deserve a lot of respect for wrestling everyday for almost two weeks straight and putting on really fun matches in the process. Best of the Super Juniors made me an even bigger New Japan Pro Wrestling fan and now all roads lead to Dominion on June 19 where Ospreay will most likely get his title shot.