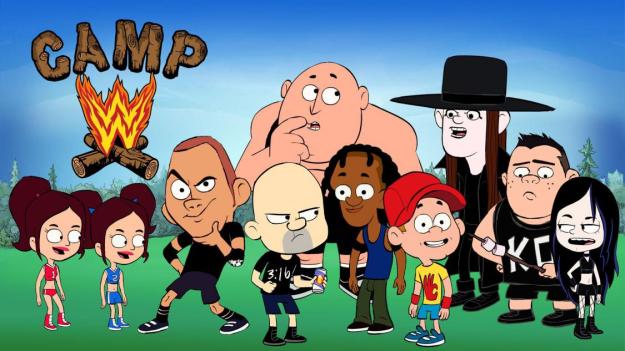 Camp WWE is the newest original program from the WWE Network. This animated series breaks from the norms of the current PG environment with a TV-MA rating that is chock-full vulgarity and laced with all sorts of crude overtones. Think South Park or Robot Chicken as your inner wrestling fan indulges in the obscene with most of your favorite WWE superstars as children.

Episode 1 titled “There’s no place like Camp” centers around Vince McMahon stealing the camper’s care packages, which ends up making little John Cena home sick because he thinks his parents forgot about him. Vince brings in Ric Flair to cheer up Cena to prevent homesickness from spreading to the other campers.

Flair’s efforts fall short due to his promiscuous recreational activities. Vince takes a stab at cheering up Cena, then he literally tries to stab him as he chases the little scamp through the woods with a machete.

Ric Flair and Sgt, Slaughter were really good here, but Vince McMahon is the shows shining star. He was spot on as a zany proprietor who swears like a sailor while spinning tragic tales to keep the kids from wanting to go home.

The voice acting of the campers was awful and didn’t resemble or sound like their real life counterparts. This ultimately took me out of the experience until Vince McMahon or Ric Flair were back on-screen. The same can be said for the humor as the laughs were few and far between and tried too hard to stand out.

Overall, Camp WWE has some real potential, however, the show needs some work if has a chance of being one of the standout hits that raises the profile of the WWE Network. Not being vulgar and over the top simply for the sake of doing so will serve the show well going forward.