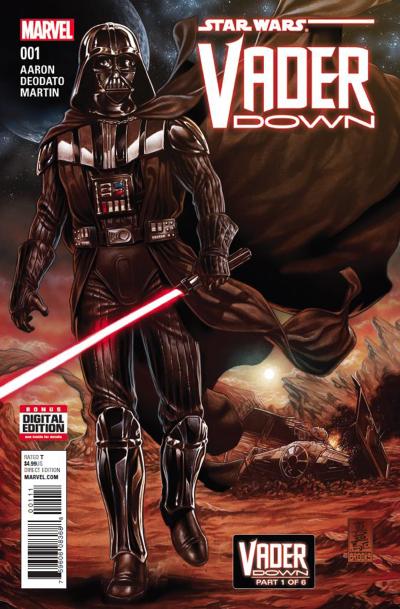 Vader Down takes us on a journey where we seek to find the answer to an intriguing question; What happens when Darth Vader is all alone against the entire might of the Rebel Alliance?

There have been a lot of comics over the years that show an outgunned Dark Lord overcoming insurmountable odds with the swipe of his crimson blade.  Some of his victories in these situations have been extremely creative and worthy of the Vader’s ruthless reputation while other incarnations left a lot to be desired.

When putting Darth Vader in any canonical situation, you have to respect the mythos and pathos of the character while being very selective in when, and if, he loses a battle.

Losing every week and having him shake his fist, ala Dr. Claw, shouting “I’ll get you next time, Gadget! NEXT TIME!!!” would dilute his legendary aura.

In this current story arc, Vader hasn’t taken a loss, but is very close to being knocked on the ropes as he has not only lost favor with the Emperor over the Battle of Yavin, but he’s leading an Imperial inquisition of a heist that he’s responsible for.

This first installment opens with a Vader tracking down Luke Skywalker, who he has recently discovered is his son, on the planet Vrogas. Vader comes out of light speed and is immediately ambushed by an armada of Rebel ships.

My first thought when seeing this was, “how in the hell is Vader going to dodge all of that firepower?”

The answer lies in the artwork of Mike Deodato that litters the page with enough laser bolts to light up the darkness of space and showcasing why Anakin Skywalker is the best star pilot in the galaxy.

Vader is eventually sent crashing to the surface in a well-realized manner, both in visual and in story. Kieron Gillen has done a great job of exploring Vader’s psyche in the ongoing series and Jason Aaron carries that over in this brief, but important moment.

Marvel is on a hot streak right now when it comes to Star Wars. This opening salvo harvests what could be a magnificent crossover event. Mike Deodato’s beautiful illustrations, with the help of Frank Martin’s coloring, sets an intense tone while Jason Aaron concocts a pleasing story that is new-reader friendly and keeps the cohesion of the other titles.