Home › Pro Wrestling › After the Bell: Looking Back at ElkMania 3

After the Bell: Looking Back at ElkMania 3 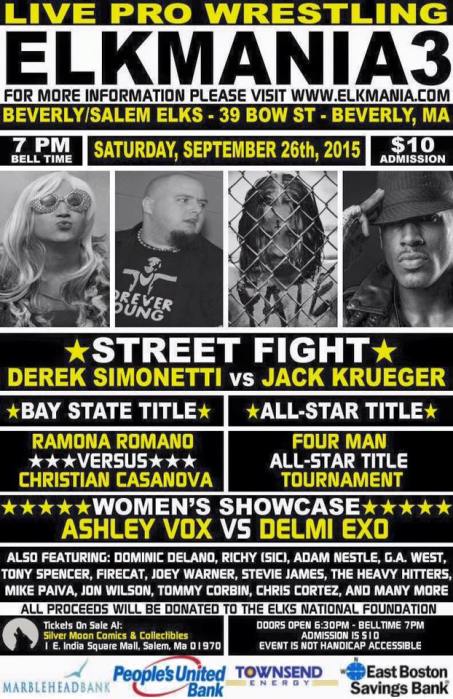 I’ve been promoting wrestling shows off and on since 2006, and no matter how staunch I’am with my preparation, problems always occur. The road to ElkMania 3, held ten days ago, was littered with obstacles. That in itself is par for the course when it comes to independent wrestling, however, political pressure reared its ugly head.

My partners and I tried to edify the ill-informed party on how we put on a family friendly show, but after going around and around, like a merry-go-round, it became clear that enlightenment was never their objective. Like many things in life, fear of the unknown closed up their mind’s eye with an impregnable seal of egotism.

It seemed as if the lightning bolt of Zeus was ready to strike down upon us. However, those on Olympus who knew of our charitable deeds gave us shelter, but warned us to tread lightly. Promotional efforts for the event were hindered and fear and doubt began to cloud our judgment.

What is normally a substantial marketing campaign became a conservative whisper as we sat with our fingers crossed, praying that someone had heard us. ElkMania 3 had all the makings of a failed endeavor. At dinner a few nights earlier, I expected the passage of my fortune cookie to say “Do not pass go on your wrestling show.”

The day finally arrived. We assembled the ring, set up the chairs, installed the sound system, furnished the stage, prepared the cameras, arranged the concession stand and readied the ticket booth. The wrestlers arrived, promptly and enthused while a couple of fans lined up early.

Now we were past the point of no return. Whatever would be, would be.

Twenty minutes into the show, we encountered a problem that we never expected. We actually ran out of chairs for the audience members to sit in. I couldn’t believe it! There was a never-ending line of people who wanted to check out this wrestling thing. We swiftly rummaged through the building to find as many extra chairs as we could. Even that wasn’t enough as more and more people kept filing in.

We even dragged some of the couches from the lobby, asking our guests to excuse us as we looked for the most ideal positioning to bestow our borrowed furniture. However, that still wasn’t enough. With absolutely no more seats to distribute and the sounds of bodyslams and adulation filling the air, I made the call to offer standing room only tickets at half price.

Much to my surprise, not a single person complained because they were happy to take part in this experience. Instead of wondering if people would show up, I was now concerned that we might have to turn people away to stay in compliance with the building’s fire code. Luckily, that never came to pass!

From the opening rendition of the National Anthem sung by Annie Brobst, to the final bell of the evening where Derek Simonetti choked out his villainous foe, the crowd was white-hot for all of it.

The lights-out entrance of the Michael Jackson–esque Christian Casanova drew a cascade of oohs and aahs as he moonwalked across the stage, Stevie James received a heartfelt thank you from the audience as he was helped out of the building after dislocating his knee, and Joey Warner received a loud ovation as the third slap of the referee’s hand confirmed him as the inaugural All-Star Champion.

ElkMania 3 was the highest attended and most profitable event in the series, in which all the proceeds were donated to the Elks National Foundation. A reporter even came to the show and interviewed myself and some of the wrestlers. As families left the building, they expressed their joyous satisfaction, indicating they’ve attended all three events.

All of the success from the event is a testament to the talent and dedication of the wrestlers who put on a captivating show and the staff who worked tirelessly to make sure that everyone’s needs were met. I’m beyond proud of each one of you, and I can’t wait to do it all again next year.

PS: I’m extremely flattered by those who keep asking me if I’m going to lace up the boots for next year’s event. All I can say for now is…….

“Difficult to see. Always in motion is the future.”

ElkMania matchmaker Atlee Greene threatened to fire Nestle but decided against it since Joey Warner wanted to beat him for the title. As for Spencer, Greene ordered him to wrestle in the next match, making it a Triple Threat

Special Attraction: Osirus pinned Frank the Crank after reversing a chokeslam into a roll up.

Women’s Showcase: Ashley Vox pinned Delmi Exo with her feet on the ropes.

Bay State Championship Match: “The Goddess of Beauty” Ramona Romano defeated Christian Casanova to retain the title after getting his shoulder up at the last second when being pinned via a German Suplex.

ElkMania 3 raised $1,740.00 as all proceeds from this event were donated to the Elk’s National Foundation which supports youth programs, veteran services and scholarships initiatives. We would like to thank our sponsors, Marblehead Bank, People’s United Bank, Townsend Energy, East Boston Savings Bank, and Gio’s Pizza for their generous donations.