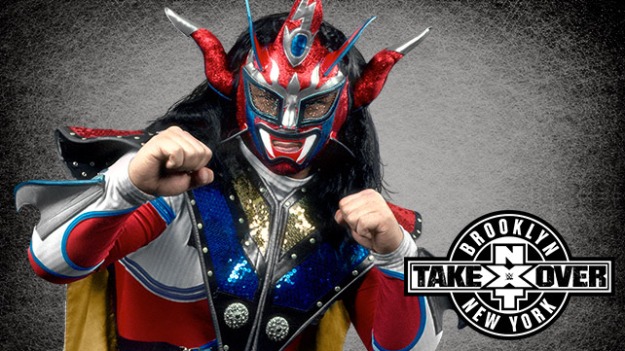 Jushin ‘Thunder’ Liger captured my imagination from the moment he emerged from the curtain at WCW Superbrawl II. Liger lost the Light Heavyweight championship to Brian Pillman on that February evening in 1992, but it didn’t matter. The mixture of revolutionary high-flying moves and technical wrestling coupled with his anime inspired ring gear had me at hello.

Liger has wrestled all over the world. You name the promotion, and he has been there. That is, except for WWE. That will finally end as it was announced that Liger will appear at NXT TakeOver: Brooklyn on 8/22/15. The event will air live on the WWE Network and spoiler alert, he will square off against Tyler Breeze.

This has been a long time coming as the shotei palm strike master is the last big name wrestler from the 90’s to never appear in a WWE ring. Yes, I know it’s NXT, but its close enough. Besides, it actually suits him more since he will have ample time to apply his craft instead of wrestling a five minute throw away match on Raw.

WWE has never known how to properly use or implement cruiserweight wrestlers. As cool as it would have been to see Liger on a WrestleMania or Summer Slam card, the reality is, his 5’ 7” frame would have been a creative detriment in the eyes of Vince McMahon.

Thankfully, Vince doesn’t really care about NXT. Triple H runs the show in Orlando with complete autonomy, which means NXT will fit Jushin Liger like a tailor made suit.

I remember when the prospect of seeing Jushin Liger live seemed like a pipe dream. WCW, where he wrestled during his time in America, was out of business. WWE wasn’t interested, perhaps neither was Liger, and everywhere else seemed like too much of a step down.

That all changed when Ring of Honor (ROH) brought in Liger to headline back-to-back shows titled Weekend of Thunder. On November 5, 2004, there was no other place in the world I was going to be than the Greater Boston Indoor Sports Complex in Revere, Massachusetts. The 700 fans in attendance were there for one reason and that was to see the evening’s marquee attraction.

Before the bell rang, a tremendous ovation was followed by a plethora of streamers being thrown into the ring by the audience. The scene was reminiscent of the many Japanese wrestling tapes I’ve watched over the years. Liger defeated Bryan Danielson (Daniel Bryan) and it was everything I imagined, which made for a phenomenal live experience

If you’ve never watched a Jushin Liger match, get on YouTube and indulge yourself in his mastery of the art that is professional wrestling. There are so many matches to choose from, but if I had to name a couple of them, check out his match with The Great Sasuke during the 1994 Super J-Cup tournament or his 1997 encounter with Shinjiro Otani at Fighting Spirit.

Liger has been there and done that, all over the world which has earned him the reputation as one of the most exciting and gifted wrestlers of all time. At 50 years of age, thousands of matches over a thirty one year span will finally bring him to a WWE ring. Win, lose, or draw, wrestling fans will be treated to one hell of a show.