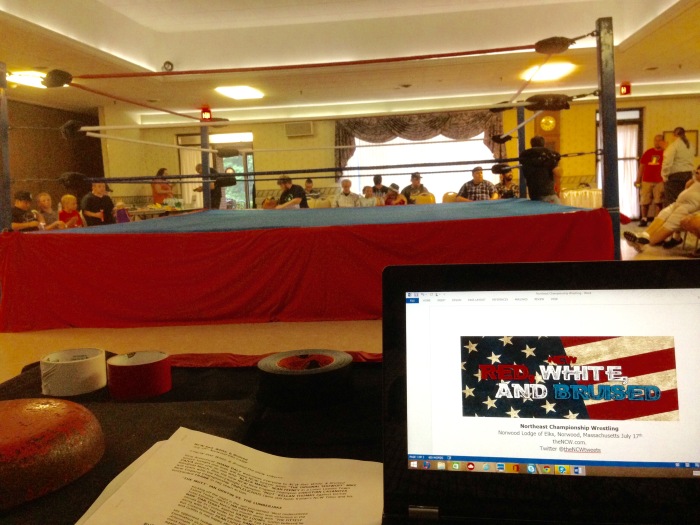 I had the pleasure of providing play-by-play commentary, this past Friday, for Northeast Championship Wrestling’s ‘Red, White, & Bruised’ event in Norwood, Massachusetts. I’ve done commentary before in post-production for a few different promotions. This was the first time I would do it live as the show was happening. I was nervous and excited for the opportunity.

Commentary is something that I’ve always been drawn towards in one form or another. In my younger years, calling the action while recreating Saturday morning wrestling matches with my WWF Hasbro figures was a constant activity. “What a maneuver!”

Later on, friends and colleagues would always tell me that I should look into doing commentary due to the way I expressed my passion for the business. Comments such as “Dude, why aren’t you doing commentary” would make me smile inside.

I’ve worked for NCW as a wrestler in the past, but I hadn’t seen any of their shows in over a year since that life thing has gotten in the way. Fortunately, their TV show airs on a regular basis, which helped me get caught up while ring announcer Shane Daly helped me fill in the blanks. My partner for the evening was event promoter John Casey, and we were off to the races.

There were times when I got too caught up in the story aspect of things and forgot to focus on the moves in the ring. Podcasting and doing commentary in post is one thing. It’s a different animal when you’re calling the action live with no second chances. It wasn’t hard work, but it was a lot of work to convey the information in an entertaining fashion while constantly thinking on my feet.

Norwood is a hot bed for NCW and they were treated to a great show that provided something for everyone. The main event featured “The Original Showoff” Mike Paiva vs. “Black Magic” Sean Feeny in a Loser Leaves Town Blindfold Match. Several months ago, Feeny blinded Paiva with fireball ala The Shiek. Paiva got his revenge and sent Feeny packing.

NCW will be back in Norwood on Friday, August 14th for the 2015 Big City Rumble. Referee Redd Roché will trade in his zebra stripes for wrestling boots. I’m not missing this one as Redd is someone who I’ve booked for my shows and is a pleasure to work with.

I want to thank John Casey for the opportunity as it was an experience I won’t soon forget.