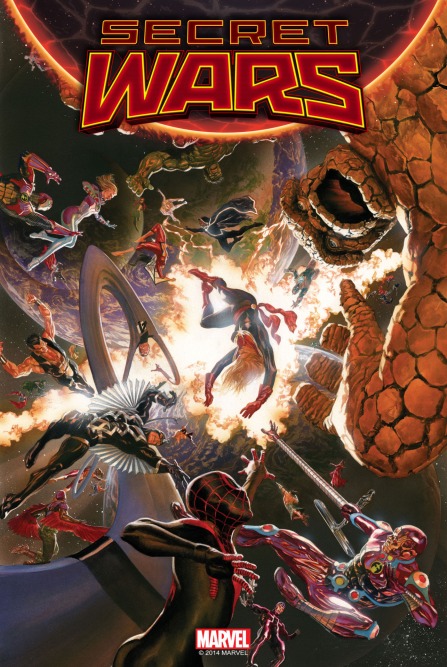 Time has officially run out. Only two worlds remain.

This is the story that Jonathan Hickman has been building towards since Avengers #1 and New Avengers #1 kicked off the Marvel NOW initiative back in December 2012 and January 2013. Hickman has done something special here as he’s weaved a story that is easy to appreciate regardless of whether you’ve been keeping up with his Avengers’ books or jumped right into the deep end without knowing how to navigate the waters of this universe ending event.

Secret Wars is a name that has been synonymous with Marvel comics since the inaugural series carrying that name occurred in 1984 with the Mattel action figures based on the story coincided with the release of the famed limited series. There have been other limited runs using the name but this 2015 edition promises to change everything……and it does!

When examining the past, present and future of the Marvel universe in relation to Secret Wars, Doctor Doom is one of the most, if not, the most important piece of the puzzle. He caused a lot of damage in the inaugural series and he is pretty much doing the same today.

The book opens with Doom, Doctor Strange and Molecule man face-to-face with the Beyonders. Doom discovered their plan to destroy the multiverse and his plan to stop them triggers some unfortunate side effects which brings us to the current state of affairs. There is a white light that appears to represents God’s hand in all of this, and of course, Hickman makes it pay off as Doom has absolutely no problem defying him.

Things transition to the battle to end all battles in New York City as Earth – 616 (Regular Marvel Universe) and Earth- 1610 (The Ultimate Universe) throw everything at each other in order to save their world. Hickman did a superb job of conveying the gravity of this grave situation through the actions of the characters. In the Ultimate side of things, S.H.I.E.L.D. is forced to work with Maker in order to find a way to stop the incursion by destroying Earth- 616.

Maker, the former Reed Richards, has become an egotistical, megalomaniac, and is the last person Nick Fury would ever work with, but realizes has no choice even though he knows that Maker has his own agenda. In the regular universe, the Future Foundation is in final preparations to launch an arc to salvage their world while saving some important folks to rebuild the human race if their plan fails.

Esad Ribic deserves all the props in the world for making the opening salvo of this series such a visual delight that made it very easy to tell which universe we were in as the story progressed. The images of the two worlds coming closer and closer together echoed that time almost up feeling that added more tension with each turn of the page.

The desperation on both sides was pronounced to the nth degree when Cyclops absorbed the Phoenix force. This moment gave me pause because it was a roll of the dice as to which version of the powerful entity would appear. Knowing the implications of what each one brings to the table made me cringe because things could go from bad to worse in a heartbeat.

Some of our favorite heroes bite the big one here and normally it’s easy to ignore since everyone eventually comes back form the dead. However, with 33 Marvel titles being cancelled due to this event, things are kind of at a standstill right now since we don’t know what questions the emergence of Battleworld will answer thus, their deaths in this particular case are a little more intriguing.

There were also some fun moments to be found here which speaks to how Hickman can so easily find levity in the midst of a cataclysm where is doesn’t detract or distract from the main story being played out. Wilson Fisk has a moment with some of the other street level villains, and it was nice to see how they reacted to the end of the world since their lust for power and money is small potatoes in the overall scheme of things.

Sure enough, the Punisher crashes the party as only he can. Just like Fisk and company, Punisher can’t offer any assistance that would help the likes of Iron Man and Hulk, so he savors these last few moments and utters an epic line that fit the character perfectly while leaving the end result to our imagination. I normally hate when this happens because it’s the writer’s obligation to tell and finish the story we’re paying for. However, this is an exception because history shows this could go one way or another.

My phone blew up within hours of the book’s release because a lot of my non-comic reading friends were convinced by the onslaught of Marvel advertising that they needed to take part in this event. The fact that the marvel universe, as we know it, has ended shocked everyone not in the know. While it wasn’t a shock to someone who knew the end was near, the construction of the plot and its execution made this feel like something special.

Jonathan Hickman delivers in a big way here and with the splendid artwork of Esad Ribic and the gorgeous coloring of Ive Svorcina, Secret Wars is in excellent hands and plans to take us on a the ride of a lifetime.