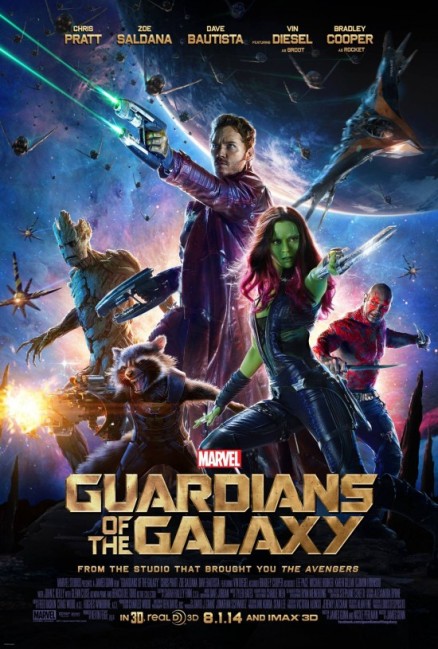 I know I’m late to the party with this review, but my brain exploded after witnessing a space opera for the ages and it took me a few weeks to piece it all back together. I’m going to tell you the same thing about Guardians of the Galaxy that I said about The Avengers. There is no amount of telling you how awesome this movie is that will prepare you for how awesome this movie really is. It entertains on every level and brings new meaning to the term “Marvel Cinematic Universe.”

This was by far Marvel Studios riskiest endeavor to date since GOTG was a property that most comic book fans weren’t even familiar with. Those claiming Marvel brand loyalty for the films $94,000,000 opening weekend are wearing blinders. The action was amazing, the storytelling was injected with a perfect cadence of humor, and the character development was spot on. Without those elements, the story would have meant zilch. Music is a key component of any movie and while the score had some good numbers, it was the sound of 1970’s R & B that truly became a character of its own and enhanced the viewing experience.

Speaking of the characters, all of the actors brought them to life in a marvelous way and I had a blast with all of them. Peter Quill, aka Star Lord, played by Chris Pratt was perfect as a Han Solo-esque sarcastic jerk with a heart of gold. I have a feeling Pratt is going to be Hollywood’s next leading man. Zoe Saldana did a serviceable job with her portrayal of green skinned assassin Gomorra. Dave Batista was the biggest casting gamble, but it paid off ridiculously well. As a WWE fan, wrestlers tend to stick out like a sore thumb in movie roles. Not this time. Batista was blended in perfectly and owned the role of the metaphorically challenged maniac, Drax the Destroyer. “I AM GROOT” is all you need to say about Vin Diesel’s work as the lovable humanoid tree, Groot.

Now let’s talk about Rocket Raccoon. First of all, I’m not calling him a raccoon because quite frankly, I don’t want to get shot by a Hadron Enforcer. In all seriousness, though, Rocket is the heart of the movie. Bradley Cooper did a real service to the character by giving him a cockney/guy from the city type of voice and brought him to life in a way where you don’t just see a furry CGI creature on the screen. I laughed when Rocket orchestrated a prison break at the lunch table; I felt every crack of his heartbreak when he voiced his vehement disdain for being called rodent; I was cheering him on like the Patriots in the Superbowl when he defended the surface of Xandar from the evil forces of the Dark Aster.

For all the things Marvel does right, they get a lot of slack for their one-note antagonists. Loki is the crème de la crème of their villainous roster, and it’s hard to compete with the gravitas that Tom Hiddleston brings to the scorned Asguardian. However, Lee Pace did a great job as the films baddie, Ronan the Accuser. While Ronan would have come across as a mustache twirling foe in any other MCU flick, here, he was just what the doctor ordered. Having a powerful, nonsense villain with conviction offset the quirky tone of the film and thus conveyed the gravity of a grim situation. Speaking of another bad guy, Michael Rooker was the highlight of the moment when he was on-screen as the blue faced, red Mohawk wearing ravager, Yondu. His back-and-forth with Quill was hilarious and added some complexity to their backstory.

Guardians of the Galaxy has received a tremendous response and I think I’ve only seen two bad reviews. Both of them, I might add, were full of factual flaws and pointed out missing elements that were clearly evident in the film, but I digress. I haven’t had this much fun in a movie theater since The Avengers, and I have seen it four times with a fifth viewing on the horizon. This begs the question, is Guardians the best Marvel film? It is my favorite Marvel studios release, but I can’t say with 100% confidence that it is the best of the best. The Avengers and Captain America: The Winter Soldier are amazing pieces of cinema and I flip-flop on which one is the gold standard. Then again, you almost can’t compare them because while they are set in the same cinematic universe, they are completely different films.

Captain America: The First Avenger made me a believer in the sentinel of liberty and now, James Gunn’s galactic masterpiece has made me go all in with Guardians of the Galaxy. I’ve been buying merchandise like crazy, ordered the soundtrack on iTunes, and telling anyone who will listen that they need to see this film.