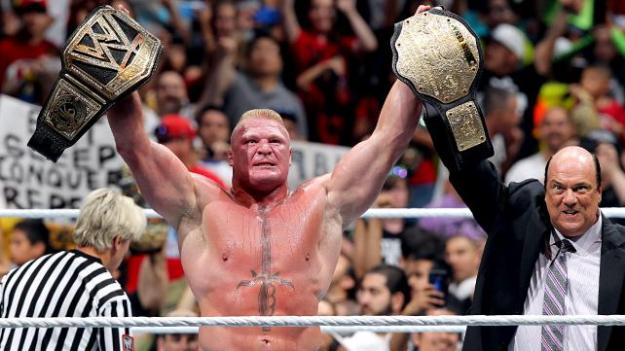 John Cena got the crap kicked out of him on Sunday night. That is the only way to describe the Summer Slam main event between him and Brock Lesnar. There was a lot of talk about how this match was going to go. Some felt Lesnar should win while others felt he should never see the gold and leather of the world title due to his part time status.

This match was as real as it gets in pro wrestling. Brock Lesnar got his Incredible Hulk on and threw around John Cena like he was Loki. 16 German suplexes highlighted a symphony of domination that has never been seen before in a WWE main event.

MMA has its share of one sided bouts which is impressive because it’s real. Scripting the same in a worked environment would normally be anti-climactic. Not this time. Brock Lesnar and John Cena put on a hell of a show and made it work to the nth degree. Cena deserves a lot of credit for putting his ego aside and doing business in a way that Hulk Hogan, Stone Cold Steve Austin and The Rock would never even consider.

If this was a shoot, John Cena wouldn’t deserve an immediate rematch. However, allowances can be made. In the UFC, TJ Dillashaw dominated the seemingly unbeatable Renan Barao to win the Bantamweight title. Barao is getting an immediate rematch, much to the dismay of some, considering how he lost. However, others feel his rule over the division makes him an exception to the rule. The same logic could be applied to Cena since he is a former 15 time world champion who has beaten them all.

I thought it was smart to book Roman Reigns vs. Randy Orton right before the main event. That spot is usually reserved for a less important match to cool down the crowd. However, something different was at play here. Even though it wasn’t the main event, it was the last wrestling match of the evening. Cena/Lesnar was an execution and fans are used to seeing a highly contest, drama filled finale. Plus, Reigns is the rumored heir apparent for the top spot on the roster.

The fact that a co-worker of mine, who doesn’t watch wrestling, walked up to me and said “I heard John Cean got his ass kicked” echoes a sentiment that wrestling has been missing for far too long. Brock Lesnar is a once in a lifetime attraction and he doesn’t need to be in the regular rotation. In fact, his next scheduled appearance isn’t until 9/15/14, twenty seven days from now. Paul Heyman will take care of the week to week build so there is no need to bother the “BEAST” with petty squabble.

WWE has something special here with Brock Lesnar becoming champion. While their track record with being able to sustain a hot angle doesn’t instill much confidence, the majority of the work is already done for them. Booking Lesnar is as simple as it gets. Just put him in the ring and let him do his thing. It will be the easiest money they’ll ever make.