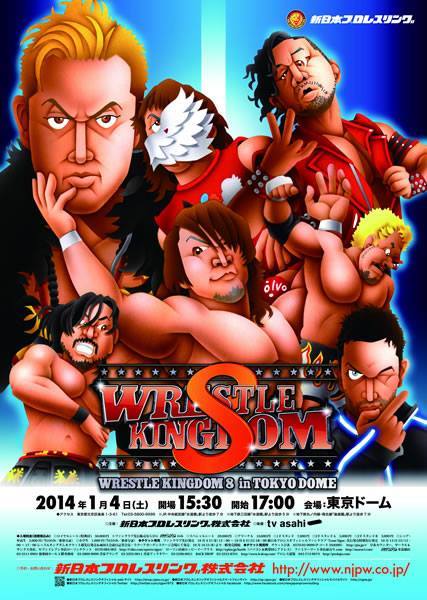 Any wrestling fan worth his salt knows what January 4th represents. It is the biggest day of the year for Japanese pro wrestling as New Japan Pro Wrestling puts on their annual Wrestle Kingdom event otherwise known as the Tokyo Dome show. The perspective magnitude of this event is equal to WrestleMania and boasts an impressive resume of spectacle and sport.

This year’s offering aired live on U-Stream with a $35.00 price tag and treated fans to 5 ½ hours of some of the year’s best wrestling action. While an event starting at 2:30 a.m. due to a fourteen hour time difference will test the limits of any night owl, watching it live instead of seeing it weeks later on DVD, spoiled, was a real thrill.

Let’s talk about some of the matches.

This was full of breakneck action that never let up. The innovative maneuvers consistently popped the crowd, and the little slithers of comedy were an added bonus. Alex Shelly is player no matter where he wrestles and has really found his footing in New Japan. The Young Bucks never appealed to me but their new-found aggression has increased their stock as a team. The ridiculously high moonsault Matt Jackson delivered to win the match made my jaw hit the floor.

The NWA World Heavyweight title is not worth a plug nickel but you’d be hard pressed to tell that to the Japanese faithful who respect the history of this once prestigious championship. The normally reserved fans in the Tokyo Dome jeered every move Conway made and cheered every time Kojima struck. The fans made this match and Conway and Kojima did a great job of feeding off that emotion and executing all the key elements that made it so fun.

Hirooki Goto and Katsuyori Shibata kicked the shit out of each other. There is no punch line here. They spent fifteen minutes and thirty-three seconds just kicking each other as hard as they possible could. This served as the blow off to their feud and carried that big fight feeling that made it the most emotionally charged bout of the evening. The ending resembled the Undertaker vs. Triple H match from WrestleMania 27. Goto won but couldn’t leave under his own power. Shibata chose amity over hostility and helped his battered comrade back to the locker room.

You play a CD and enjoy the melodies until all of a sudden, the damn thing skips. You clean the smudges from the back of the disc, thinking the worst is over until it skips again. Kota Ibushi and Prince Devitt were on the verge of a riveting crescendo but it was blanketed by disruptions in cadence from Devitt’s Bullet Club faction. Devitt’s ring entrance was tremendous as he emerged from a coffin with his body paint as Carnage from the Spider-Man comics and sauntered toward the ring like a zombie to intimidate Ibushi. The match had its moments but they’ve had better against each other. That’s not a knock, they were just handcuffed by over booking. Prince Devitt is a remarkable wrestler who can do it all and Kota Ibushi might be the single most athletic performer in the industry today.

This was a weird for me. It wasn’t bad match by any stretch of the imagination but it wasn’t my cup of tea. Online feedback and people I’ve spoken said this was match of the night. It was worked as more of an American style match as both men sold their moves in dramatic fashion. This altered my expectations from strong style to American ring psychology where telling a story as opposed to trying to resemble a real fight, like in Japanese wrestling, is the goal.

Shinsuke Nakamura and Hiroshi Tanahashi earned top billing as the shows main event through fan voting. The Intercontinental title match garnered 20,422 votes compared to the world title match which earned 11,886 votes. This was the match I paid to see because Tanahashi is always money and Nakamura is my favorite wrestler to watch. The story line is simple. They are the two top dogs in New Japan who have done it all against each other. The sheer intensity of this match captivated my attention to the last bell. An amazing false finish occurred when Tanahashi tried for a Texas Cloverleaf, Nakamura blocked it, so Tanahashi turned it into a Styles Clash for a close near fall. Tanahashi finished off Nakamura with a sequence involving two High Fly Flow frog splashes when he barely hit the first one and immediately jumped off the top with a second High Fly Flow for the win.

New Japan has started off 2014 off on the right foot with a stellar event with top-notch production. It will be interesting to see which direction they go in with Okada and Tanahashi holding the two belts and I can’t wait to see how it all unfolds!