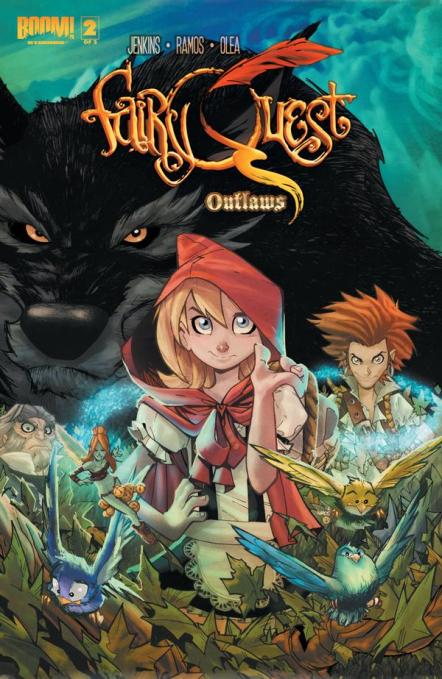 Last year, Paul Jenkins and Humberto Ramos opened a Kickstarter campaign to publish Fairy Quest, on their own, as a beautiful hard cover graphic novel. Over $95,000 was raised in order for their passion project to see the light of day.

Now their story is being released in single issues. Fairy Quest is set in the world of Fablewood, where all of your favorite bedtime stories live together. Things aren’t all they are cracked up to be as Mister Grimm and his “Think Police” will mind wipe those who don’t literally stick to their story.

Red Riding Hood aka “Red”, and the Wolf are actually friends who no longer want to live in the same cycle of storytelling. They go on a quest to find a place called “Real World” where they can live the life they desire.

The relationship between Red and Wolf is what strengthens the script because they know each other so well and would do absolutely anything for one another. You would think it would be odd to see them getting along so well due to their storybook rivalry, but Jenkins makes it come across organically.

Humberto Ramos’ magical artwork is the perfect fit for this fabled adventure and it shines in every panel of the book. The opening page shows the real world implications when one deviates from the script, and despite this you still find yourself rooting for Red and Wolf to succeed, without a second thought, even though one of the most popular stories of all time will be erased from existence as a result.