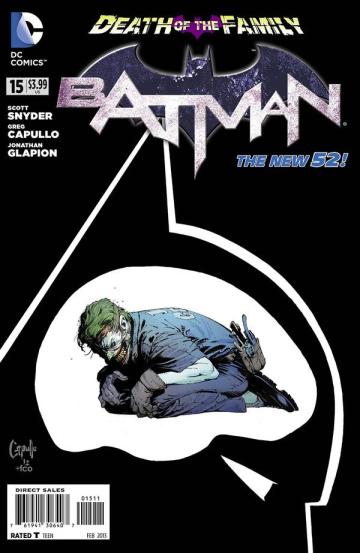 The “Death of the Family” story arc rolls on and The Joker has the entire Bat-Family on edge. Scott Snyder’s writing has done a wonderful job of accentuating the fear of our clown-faced villain. Every superhero has an arch nemesis, or ten, and despite the trials and tribulations, they are confident they will win the day.

Batman is probably the most intelligent and savvy crime fighter in the game today. This would make you assume he too is confident that he will stop The Joker. However, he’s not confident at all. In fact, he is so unsure of the final result, he is keeping his cards close to his chest.

Speaking of cards, one card in particular has brought to light a shocking revelation regarding The Joker’s potential intrusion into the Batcave, many years ago. Dick, Jason, Barbara and Damien are beyond upset this was kept from them and are convinced The Joker knows their secret identity.

Bruce believes he doesn’t know their identities and is just playing mind games. Dick notices that Bruce doesn’t sound so sure of himself and this leads to a four-on-one tension filled argument that was almost uncomfortable to watch, in a good way, of course.

The backup story written by Talon scribe, James Tynion IV puts the spotlight on The Riddler who makes his “New 52” debut. Instead of the dangerous riddles we are accustomed to; it is his intelligence that Yynion brings to the forefront.

Not being rattled, in the slightest by The Joker’s antics while locked up in Arkham Asylum paints the green menace in treacherous light and he will no doubt; bring The Dark Knight some serious problems in the future.