Home › Pro Wrestling › The Good, the Bad and the Ugly of TNA Impact

The Good, the Bad and the Ugly of TNA Impact 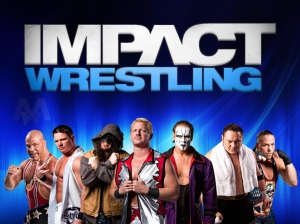 The Good, the Bad and the Ugly of TNA Impact  (Blog I wrote for gerweck.net)

The Good: The opening segment with Austin Aries delivered on all accounts, mainly because of Austin Aries. Yes, I know Vince cut him from Tough Enough before it began and some critics feel he is too small to be in a main event world title match on pay-per-view, but his in-ring work and charisma makes you forget about those things. He is one of the best workers on TNA’s roster and I expect him to take full advantage of his opportunity at Destination X which will be the most important match of his career.

Aries is in a situation similar to the one that Jeff Hardy was in when he wrestled Randy Orton at the 2008 Royal Rumble. While it would have been cool to see Hardy win the title, it was really a proving ground match to see if he was worthy of being of champion someday. Aries is on the rise, and has clearly out-grown the X-Division. On paper, his match with Bobby Roode should not disappoint in the slightest.

The option to have a world title match, should they choose to forfeit the X-Division title, was brilliant. It actually makes the championship mean more because every year around this time, wrestlers will be gunning for the title as a means to get their hands on the big boy belt. I do not believe this de-values the belt because every wrestler’s lifelong goal is to be world champion. No one dreams of being second place.

-I was very happy to see Taeler Hendrix on Gut Check against Tara. I worked on a few shows with her in New England and she is a hard worker, a pleasure to talk to and you can’t help but root for her. She won over the crowd, which I’ve seen her do multiple times, and that is the kind of worker you want on your roster.

-The Bound for Glory Series is off to a great start. We should see a strong chain of matches this year with plenty of twists and turns heading into October. The ten minute time limit was appropriate for Open Fight Night because several of the BFG participants were given the opportunity to earn some desperately need points and catch up with James Storm who is way ahead of the pack with 27 points. Kurt Angle is in second place with 10 points and Magnus, Pope D’Angelo Dinero and Jeff Hardy are tied with 7 points each.

The Bad: Every second of every Brooke Hogan segment.

The Ugly: The AJ Styles and Dixie Carter announcement was counter-productive television at its finest. WTF were they thinking? What is the payoff? Because I didn’t see one. The big reveal got over like a fart in church as everyone in the impact zone sat on their hands. I dare say Vince Russo could have booked a better outcome. If he had booked this, at least we would have got some type of baby space alien out of the deal or something ridiculous. The ending and execution were horrible beyond comprehension. Hell, I had no idea what was going on until Mike Tenay yelled “AJ & DIXIE HAVE REDEEMED THEMSELVES.”

The lady who played the “addict” couldn’t act a lick. If you were really going to go this route, at least have the addict be someone the fans will care about. You have a roster full of wrestlers and you couldn’t use one of them? They could have turned it into a nice road to redemption storyline for whoever they picked. The people need to care about the victim in order for there to be any sympathy. It’s storytelling 101. The addict was also preggers,  which completely threw me off. My wife, who never watches wrestling, thought the addict was going to be a surrogate mother for either AJ or Dixie and the other simply helped to facilitate the arrangement.

Something of that nature is a very personal and private things for a family to go through so that would have explained why Dixie was so mad when the phone conversation aired on television. Not to mention the fact that while the addict was clearly pregnant, they never even mentioned that at all.  Most of us could have had sympathy for the baby, at least.  How did AJ and Dixie know this person?  What made them want to help her so much?  Was she just someone they ran into on the street?  Does she even have a name!?

Final Thoughts: TNA really needed to knock it out of the park with this storyline and they failed miserably. However, there was a lot of good stuff on this show and the efforts of all parties involved should not be ignored. However, the “secret” was the main attraction of the evening so the episode as a whole lives or dies based on its outcome. While I was extremely disappointed in the finish of the show, I’m going to look on the positive side of things because as a wrestling fan, I want TNA to succeed and so does everyone else.