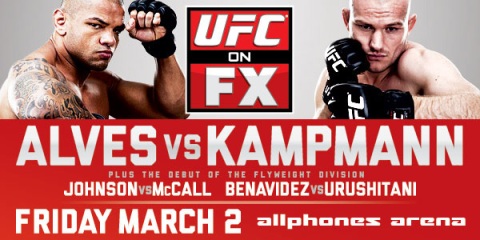 Shawn Jordan over Oli Thompson via TKO in the 2nd Round

T.J. Waldburger over Jake Hecht by armbar in the 1st Round

Anthony Perosh def. Nick Penner via TKO in the 1st Round–

Constantinos Philippou defeated Court McGee via unanimous decision 29-28 across the board: The story of the fight was McGee coundn’t get anything going as Philippou made him uncomfortable and dictated the pace.

Demetrious Johnson defeated Ian McCall via majority decision as two judges scored it 29-28 Johnson and one scored it a draw: McCall stormed out of the octagon as the fans chanted bullshit. I scored it 29-28 McCall and Kenny Florian even disagree with the decision. McCall control the fight by utilizing inside trips to secure takedowns. Johnson didn’t score a single takedown. McCall show no sign of first time jitters and displayed a lot charisma. He is going to be a star.

Joseph Benavidez defeated Yasuhiro Urushitani via TKO due to strikes at 0:11 of the 2nd Round: Benavidez came out and immediately dropped Urushitani with an over hand right. He jumped right on him and pounded him until the ref called a halt to the action.

Martin Kampmann defeated Thiago Alves via guillotine choke at 4:12 of the 3rd Round: With the exception of a teep kick that hurt Alves early in the first, Kampmann was dominated for the majority of the fight. He kept getting hit with punch after punch and was taken down a few times even though Alves couldn’t do anything with it. The finish came when Kampmann hooked the guillotine as Alves shot in for the takedown.