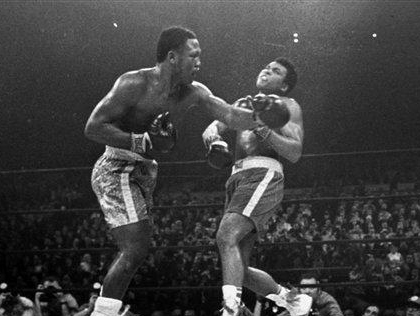 Who Says Fighting Solves Nothing?

My parents hadn’t met each other yet when Joe Frazier was the heavyweight champion of the world. Still, I felt a lot of sadness when news of his passing broke. I’m a casual boxing fan at best who enjoys the big mega fight on occasion. Watching Joe Frazier beat Muhammad Ali, via VHS, was a moment for me that validated the notion that ethnicity is not defined by public perception or stereotypes. In the days leading up to their encounter at the Garden, Ali hurled a plethora of racial insults that questioned how “black” Frazier really was. Ali was loud and flamboyant while Frazier was reserved but fierce. Fight night arrived on March 8, 1971 and ‘Smokin’ Joe did his talking in the ring.

Today in professional sports, Caucasians are described as blue collar and hardworking while African Americans are referred to as Athletic and explosive. Why can’t it be the other way around?  Better yet, why does it have to be that way at all? Joe Frazier was a blue collar American and his success was a bi-product of hard work. People in the media, and people in general, tend to forget that Frazier is the exception to a rule that should not exist. I learned that from ‘Smokin’ Joe when in my youth, I felt uncomfortable buying a Metallica album when friends where expecting DMX in my shopping cart. What was the The Fight of the Century for most was a life lesson for me. Frazier was always something of a larger than life figure in my head and even though I’m saddened by his passing, I choose to remember him for representing the best of what boxing was and what it could be again and I want to thank you, Joe, for helping me on my road to self-discovery when I couldn’t see the forest through the trees.