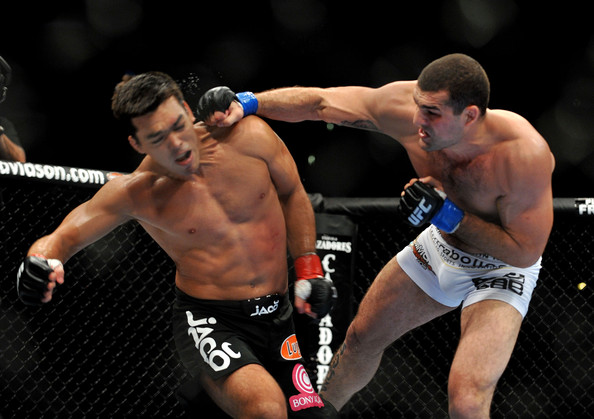 UFC 104 from start to finish was a great night of fights. It’s sad that the event will mostly be remembered for the horrible judge’s decision that gave Lyoto Machida the nod to retain the Light Heavyweight Title. Every time I watch a close fight I always get nervous when you hear the play by-play team keeping repeating “If you want to be the champion you have to beat the champion.” It right away tells me that winning on points is not enough. You better destroy the champ if you want to win the title. I don’t know how all three judges scored the bout 48-47 in favor of Machida. There is no way Machida won three rounds. I scored the bout 49-46 for Shogun. The only round I scored for Machida was the third. The second round was very close and could have gone either way however I thought Rua did just enough to edge it out.

Just enough seems to be the problem. It’s not as if Shogun dominated the fight by any stretch. He did just enough damage to out-point Machida. Just doing enough to win leaves a scorecard open to all kinds of interpretation. You and I could watch the same fight at the same time but see two different things which is the reason why this decision will not be considered a highway robbery. In my opinion Mauricio “Shogun” Rua should be the light heavyweight champion. I don’t blame Machida for saying he felt he won because he probably feels he did enough to win. Even if he didn’t  saying so would be throwing money down the toilet.

The only good thing that comes out of this will be the rematch…if it happens. Nine times out of ten the UFC never gives an immediate rematch and this fight was not enough of a robbery to give one to Rua. If Machida wins his next title defense and Rua wins his next bout, the rematch is inevitable and is more sellable then tonight’s bout. I picked Machida to win this fight via TKO in the 2nd round as I did not believe we were going to see the best Shogun ever. In fact, we did, as he displayed the best blueprint to combat Machida’s elusive style. People dismissed the prospect of Rua winning the bout because he has never displayed the tactful and patient style it takes to fight Machida. Shogun is the definition of aggression and I did not believe him when he said he was going to be patient. I assumed he would be patient for so long until that natural aggression kicked in and he started to throw those clothesline like punches in which Machida would counter with straight shots down the pipe and finish him.

I can only imagine the wave of emotions Mauricio Rua is going through. Three years ago Shogun was the number one light heavyweight in the world and was the most feared bully in the yard. Set back and losses sent Shogun to the bottom of the rankings. Now, enter the dragon as Lyoto Machida brings the most unfamiliar style we have ever seen in mixed martial arts and ascends to the top of the mountain. Two wins later, Shogun gets a shot at the title and gets to fight the man who has the same feared reputation he once had. He was a little nervous, which is something we never see from Shogun. As the fight went on Shogun became more confident while sticking to a great game plan. Despite the horrible decision, Shogun knows he has the tools to slay the dragon and he has taken away the aura of invincibility Machida had as the “Machida era” has lost some serious steam and been temporarily derailed.

It was great to see Joe Stevenson refocused and recharged. Greg Jackson has done wonders for Stevenson’s state of mind.

It was cool to see Ryan “Darth” Bader use a remix of the Imperial March as his entrance music.

Was it me or were Joe Rogan and Mike Goldberg really slurring their words on the broadcast? One of the many examples was Mike Goldberg saying “Cain Velasquez is a top container in the heavyweight division.” We all make mistakes but it got to the point where you could have played a particular drinking game every time it occurred.

Anthony Johnson, despite not making weight, was impressive in his victory. Rumors are already starting to go around that Johnson’s days at 170 lbs are over. If this is true this is a blow to his career as Johnson has been looked at as the most serious threat to GSP’s welterweight title. If “Rumble” is forced to move up a weight class then it’s a bitter sweet victory as his wallet may be a little lighter but his health will be in tacked.

I never want Gleeson Tibau to take me down……..EVER!